The History of Engadine Uniting Church

The story begins back in 1882 when the Sydney Methodist Mission purchased land in the sparsely inhabited rural community of Engadine, in the vicinity of Engadine Avenue and Woronora Road. However, portions were sold over a period of time until only one block remained by 1953.

On 19th July 1953 the first Methodist service was held in the local Church of England with a congregation of 18. This service was conducted by a retired Home Missioner the late Pastor C A Lean who had made his home in Anzac Avenue in Engadine. Mr Lean volunteered to come out of retirement to serve this area on a part time basis taking services morning and evening on alternate Sundays. The late Rev Ray Noble Secretary of Home Missions chaired Quarterly Meetings.

Twelve months later services were transferred to the Institute Hall and were held every Sunday morning. About the same time definite proposals to build were adopted with the appointment of Interim Trustees by the Home Mission Department and the purchase of the present site on the corner of Cambrai and Chipilly Avenue. Local financial assistance was assured with the first meeting of the Ladies’ Church Aid in Pastor Lean’s home in August 1954.

When we briefly announce that “on 9th October 1955 the Opening and Dedication of a Methodist Church Hall by the President of Conference Rev J Sorrell took place” our thoughts go out to those pioneers who must have felt the joy that we do today.

Services were held at 11:00 am and 7:15 pm, Sunday School at 9:45 am commenced on 16 th October. The building of this hall was made possible by a loan from the Woolnough Sites and Church Extension Fund of the Home Mission Department.

Our diary shows a quick development of events after 1955. By April 1956 the property was transferred to local Trustees and two years later the first Stewardship Programme was introduced. At a meeting in August 1960 the Trustees decided to set up a Church Building Fund for future development.

Pastor Lean conducted his final service at Engadine on Christmas Day 1960 and retired to Caringbah. In January 1961 Deaconess Ruby Sloan was appointed by the Home Mission Department for a period of two years to the Engadine Home Mission Station. During this time four local Preachers were trained and accredited, weekly Prayer and Bible Study Meetings were introduced and a monthly Men’s Tea was commenced. Quarterly and Trustees’ Meetings were chaired by Rev Allan Brand Secretary for Home Missions. It was during Deaconness Sloan’s ministry that the commissioning of a local girl Helen Thomas took place as a secretary in the Overseas Missions Department, being appointed to Darwin.

In August 1962 the Home Mission Department conferred with the architect to plan future development. That same year Conference decided to combine the Engadine Home Mission Station with the Helensburgh Circuit and appointed as Minister Probationer Harry Gregg who was ordained in 1965. During his ministry the Trustees decided to sell the property in Engadine Avenue and invested the money with the Property Department to be used as a deposit on a future parsonage. That Trust also decided to plan a church on the present site engaging Mr Geoffrey Gore as architect the building to be done by voluntary labour thus making a considerable saving in cost.

The following year Probationer Les Pearson was appointed and moved into the Parsonage at Helensburgh. Rev Pearson was ordained in that year 1966 and the circuit was raised to accept a minister in full connexion. As the greater part of the Church population centred in Engadine the Parsonage at Helensburgh was sold in December 1966 and the present Parsonage(Cambrai Avenue) at Engadine purchased for $13,700 the minister and family moving in on 19 th December of that year.

On the 28 th August 1967 the Trustees accepted the financial proposal drawn up by the Property Secretary Rev Roy Glover for the development of the Engadine property. The estimate 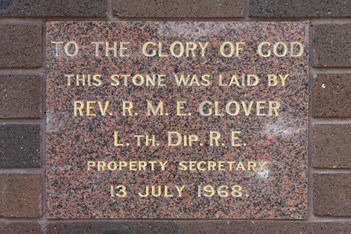 On 21 st February 1968 under the leadership of Rev L A Pearson the first sod was turned and work commenced on the new buildings and on the 13 th July the Foundation Stone was laid by Rev R M E Glover.

On the 9th August 1969 the Opening and Dedication of the New Church and Youth Centre by the President of the NSW Conference Rev Walter Whitbread took place.